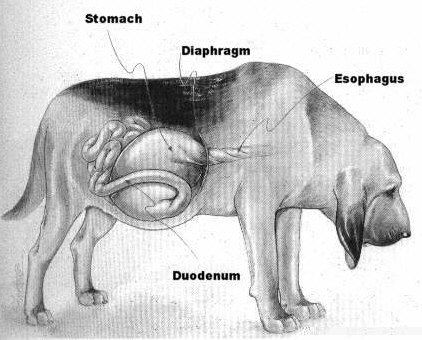 Acute gastric dilatation / gastric torsion – what to look out for??

You very often write in your emails asking for information about this condition.
This condition mainly affects medium and large breed dogs, but there are also reported cases in small breeds. There are many predisposing factors and therefore no one has fully established a single way to predict and prevent these conditions early on.

Symptoms that herald a problem with gastric dilatation/torsion syndrome:
-anxiety
-unwillingness to lie down (the dog often walks around aimlessly unable to find a place to sit)
-Frequently approaching the water bowl, drinking and trying to vomit
-drooling, licking and acting like the dog has something in its mouth
-Vomiting that fails or with very little content (saliva)
-noticeable enlargement of the abdominal cavity contour, especially the left side behind the rib arch
-yawning, panting, wheezing (clear signs of pain and discomfort)
-Wobbling, staggering, with falling and loss of consciousness

It is now determined that every hour of development of gastric dilatation/torsion syndrome, until proper treatment is undertaken, is a 10% decrease in the chance of therapeutic success!
Considering that discerning owners usually become concerned about these symptoms 1-2 hours after the process begins, there is not much time left!

Many of you write about the supply of drugs and describing the place of gas. I think it’s quite controversial and has a high failure rate. Why?

Answer. Giving diastolic medicines will bring a short effect (assuming the right dose and place of administration, but in most cases it is completely pointless, because the twisted stomach will not relax with medicines, because it is on the MAXA tightened with gases and food content. More help we can bring to the dog to protect against the development of shock (which is the most threatening to his life and recovery after surgery in the first hours), is the administration of strong painkillers. but here is another controversy in tablets can not be done (the dog even if swallowed, will immediately vomit), suppositories will have an effect but poor (there is poor absorption and circulation from the rear parts of the body due to problems with blood circulation), injections ok, but where and how much and which.

Another problem is medication "anti-shock". Taking into account the latest data <2007>From the intensive care of emergencies (gastric dilatation/torsion syndrome is one of them) in this condition there are no steroid drugs administered (and such are mainly considered to be antispasmodics). The specificity of the problem of torsion, plus the administration of steroid drugs causes in the first period of health improvement (here is a place to demonstrate the operating physician), but in the later to the significant deterioration and risk of life as a result of complications arising from these drugs (intensive postoperative therapy ineffective). Therefore, for you to administer such medications would not only be detrimental, but also cause further complications in your own dog.

The next questions are gas venting:
None of you know what kind of problem we are dealing with. The stomach can twist up to 360'. You don’t know what you are going to cut in some place described on a diagram (intestine, stomach, spleen, etc.). Of course, it will have a very good effect if, with luck, you hit the stomach and twist with a lot of gas. It’s a bit of a lottery.

Therefore, in addition to early diagnosis on your part, a quick response by phone to a trusted veterinarian and after his instructions and consent to administer painkillers (recommended by the vet not to interfere with the possible anesthesia for the surgery). Sit in the car and pipe down to the office.

The problem of dog death with gastric dilatation/torsion syndrome is not surgeon error in the operating room, it is the complications that develop post-operatively due to the time between the onset of disease and proper surgical management. The dog dies after the procedure, not during! The cause is a rapidly developing intoxication of the body, lack of detoxification and a whole cascade of inflammatory reactions causing further damage to the body.

You ask how the veterinarian’s management of this condition should look like?
Depending on the stage the dog is in at the surgery.
I will describe, in my opinion, the ideal in case of development of gastric torsion lasting about 1-1.5 hours.
The dog arrives drooling, with reflexes of ineffective vomiting, sore, reluctant to sit, restless, slight enlargement of the abdominal contour.
Clinical examination with history taking during the examination, lasting a few minutes, without unnecessary tipping and groping of the dog. In case of doubt, X-ray (laying on the side), because only this examination in very high probability will confirm or exclude the syndrome of gastric dilatation / torsion. Placing intravenous lines on two paws. Administration of intravenous painkillers, medicines to stabilize circulation, etc. Possibly gently sedating your dog. Insertion of a gastric or nasogastric probe (in case of dilation) or emergency gas expulsion (gastric torsion). Decision on surgery and life-saving treatment depends on the condition of the dog.

And this is from the life of our practice:
-A dog that was brought to us after about 40 minutes from the first symptoms (a Bernese Mountain Dog) was able to recover in no time "he licked", A doberman brought in approximately 7 hours after the first symptoms could not be saved, despite 4 staff members and quick intervention.
-A German Shepherd with torsion was put down because he had a history of eating poultry bones, the X-ray showed bones already outside the stomach (perforation of the stomach wall) and they waited since morning that it would get better on its own (they called about 18. )
-Another Bernese Mountain Dog did not make it in the morning because you ignored his abnormal behavior (quote. "he was very agitated, drooled and swollen") during the night! He called me at 6:00 when the dog was already dying!
These examples could be multiplied endlessly!