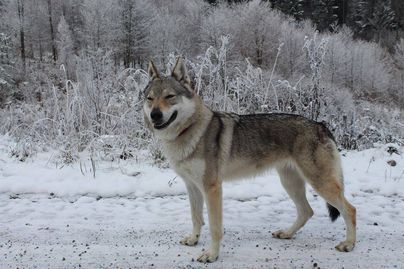 BRIEF HISTORY
In 1955 a biological experiment took place in Czechoslovakia, namely the crossing of a German Shepherd Dog with a Carpathian wolf. Experiment has shown that the offspring of a dog and a wolf and a wolf and a bitch can be bred. The overwhelming majority of puppies from these pairings had the genetic basis for continued breeding. In 1965, after the experiment was finished, a plan of breeding a new breed was worked out. It consisted of a combination of the functional characteristics of the wolf and the dog. In 1982 the Czechoslovak Wolfhound was recognized as a national breed by the General Committee of the Breeders’ Association of Czechoslovakia.

HEAD
Symmetrical, well muscled. When looked at from the side and from above forms a wedge shape. Distinctive sex characteristics.

UPPER PART:
Skull: When viewed from the side and from the front a slightly convex forehead is visible. Frontal furrow not marked. Occipital bone well visible.
Stop: Moderately marked

THE FACIAL PART OF THE SKULL:
Nose: Oval shape, black.
Muzzle : Dry, not broad, nasal bone straight.
Lips: Well-fitting, corners closed. The edges of lips are black.
Jaws / Dentition: Jaws strong and symmetrical. Well developed
Teeth, especially the canines. Scissor or claw bite with 42 teeth
as a rule. Regularly spaced teeth.
Cheeks: Dry, sufficiently muscled, not caught in the eye.
Eyes: Small, slanting; amber-coloured. Eyelids well fitting.
Ears: Standing, thin, triangular, short (i.e. Not longer than 1/6th of height at withers); the outer point of the base of the ear and the outer corner of the eye are on the same line. A perpendicular line from the tip of the ear passes along the entire head.

NECK
Dry, well muscled. In statics forms an angle of up to 40 with the horizontal line°. The neck must be so long that the dog can effortlessly get its nose to the ground.

TAIL
High set, straight hanging down. On excitation
carried in an upward curve.

FORELEGS:
Front legs are straight, strong, dry and set fairly close together with paws slightly angled outwards.
Shoulders: Shoulders placed rather in front, well muscled. With the horizontal line They form an angle of about. 65°.
Shoulder: Strongly muscled, forms an angle with the shoulder between 120° i 130°.
Elbows: Well-fitting, not bent either inward or outward, marked, movable. Arm and forearm form an angle of about. 150°.
Forearm: Long, dry and straight. The length of the forearm and the carpus makes 55% of the height at the withers.
Knee: Strong, mobile.
Wrists: Long: form an angle of at least 75 with the ground°. In movement slightly springy.
Paws: Large; set slightly outside; with long, rounded toes and strong, dark claws. Clear, flexible, dark pads.

HIND LIMBS
Strong. Hind legs stand parallel to each other. A perpendicular line drawn from the tip of the ischium runs through the middle of the hock. Wolf-claws are undesirable and should be removed.
Thigh: Long, well muscled. With the pelvis forms an angle of about 80 degrees°.
Hip joint stable and mobile.
Knee: Strong, mobile.
Shank: Long, dry, well-muscled, with the midfoot forms an angle of about 130°.
Hock: Dry, strong, mobile.
The metatarsus: Long, dry, set almost perpendicular to the ground.
Paws: Long, rounded toes with strong, dark claws. pronounced pads.

MOVEMENT
Harmonious, light, ground covering trot with limbs as close to the ground as possible. Head and neck positioned almost horizontally. He strides at the tarsus.

SHAPE
HAIR: Straight, close fitting. Winter and summer coat are very different. In winter the dense undercoat prevails which together with the coats forms a dense covering over the whole body. The hair should cover the belly, the inside of the thighs, the scrotum, the inside of the ears and the space between the toes.
Neck heavily haired.
COLOUR: Yellowish-gray to silvery-gray with a distinctive light mask. Lighter hair also on lower surface of neck and chest. Dark gray color with light mask is acceptable.

FAULTS
Any deviation from the above points is considered a fault, the assessment of which should depend on the degree of occurrence.
– Heavy or light headed.
– Flat forehead.
– Lack of two P1 or both M3 is not judged as a fault. If two P1 and one M3 or two M3 and one P1 are missing at the same time, this is considered a fault.
– Dark brown, black or unevenly coloured eyes.
– Thick, high or low set ears.
– High carried neck, low carried neck.
– Unmarked withers.
– Unusual topline.
– Long croup.
– Long, low set and badly carried tail.
– Too strong or too small angulation of forelegs.
– Weak wrists.
– Too poorly angulated or diagonal hind legs, poor muscling.
– Little marked mask.
– Short, swaying step.

Any dog clearly showing physical or mental abnormalities shall be disqualified.