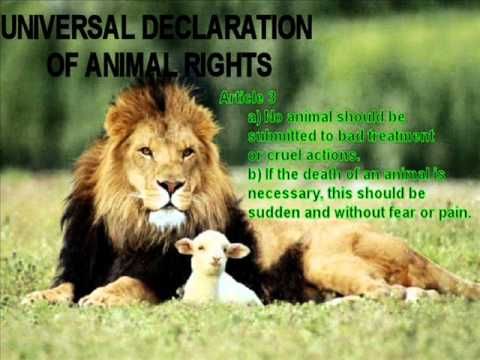 Adopted 21.9.1977 r. in London by the International Federation for Animal Rights, zał. 2.4.1977 in Geneva. The declaration was submitted to UNESCO with the signatures of two and a half million people, members of European animal care and protection societies:

"In view of the fact that every animal has certain rights,that ignorance and disregard of these rights have led man and continue to lead him down the path of crimes against nature and animals; that the recognition by the human species of the right of other animal species to exist is the basis for the coexistence of all living beings; that man is committing the crime of genocide; that respect for animals by man is linked to respect for humans among themselves and that man must be taught from an early age to observe, understand, respect and love animals; It is hereby proclaimed:

Art.3
a) No animal shall be subjected to mistreatment or acts of cruelty
(b) if it appears that an animal must be killed, it must be put to death quickly, without exposing it to pain and distress

Art.4
Every animal that belongs to a wild species has the right to live freely in its natural environment, whether terrestrial, aerial or aquatic, and the right to reproduce. Any deprivation of liberty, even for educational purposes, is against this law.

Art.5
(a) every animal belonging to a species that normally lives in a human environment has the right to live and grow according to the rhythm and conditions of life and liberty proper to its species,
b) any interference with these rhythms and conditions by humans for mercantile purposes is contrary to this right.

Article.6
(a) every animal which man has chosen to be his companion has the right to live as long as his species nature permits,
(b) abandoning an animal is a cruel and despicable act.

Art.7
Every working animal has the right to certain limits of time and intensity of this work, to adequate food and rest.

Art.8
(a) Experiments on animals which involve physical and mental suffering are against the letter of animal law, whether in the case of medical, scientific, commercial, or any other experiments,
b) foster technical methods should be developed and used for this purpose.

Art.9.
If a human being breeds an animal for food, it should be fed, bred, transported and killed without causing it distress or pain.

Art.10
a) no animal should be used for human entertainment,
b) exhibiting animals for show and shows with the participation of animals jeopardize the dignity of the animal.

Art.11
Every act which leads to killing an animal without a necessary reason is murder, which is a crime against life.

Art.12
a) every act leading to the killing of a large number of wild animals is a mass murder, i.e. a crime against the species,
(b) Pollution and destruction of the environment have killed.

Art.13
(a) a dead animal should be treated with respect,
b) Scenes of violence against animals should not be shown in cinemas and on television unless they have another purpose beyond showing how animal rights are violated.

Art.14
a) Animal protection and welfare associations should have representation at the government level,
b) Animal rights should be promoted on the same level as human rights."