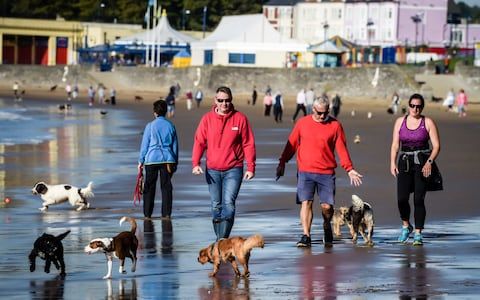 According to an OBOP survey conducted a few years ago, in every second, „statistic" there is a dog in the house. If so, why are there so many different kinds of restrictions on dogs? The answer is simple. Mistakes in behaviour of pet owners lie at the root of administrative actions concerning dogs. The ones who suffer are the ones who don't commit them. Enough that some dog handlers are not cleaning up after their pet. On the street, in the square, in the park, there are poops left. The simplest solution for an area manager is to ban the introduction of four-legged animals.

Until dog owners are disciplined, managers, especially of various recreational areas, will use a radical solution, in the form of a ban on bringing in four-legged dogs. Example of Warsaw and Konstancin. In the local spa park, at the beginning of every alley, there is a sign with the inscription: "Banning dogs". Similar regulations apply in Warsaw's Lazienki Park, Ujazdowski Park or Dreszera Park in Mokotow. Unfortunately, dogs often destroy flower beds, flowerbeds. Poop is left behind. That is why bans are introduced. Who is to blame for this state of affairs? Not dogs, after all. It is well known that not everyone who walks with a dog takes a bag for fecal matter with them. In the town near Warsaw where I live I can observe many dog owners sneaking around (maybe no one will notice) when their dog has peed. The perpetrator will often be anonymous. The lying poop will remain and irritate.

What's worse, it will contribute to building resentment against dogs and their owners. A common phenomenon is, according to the saying „my home from home" Complete carelessness, abnegation of behavior in public space. What you can't do in your own home or garden is perfectly acceptable in the street, square or park. Because it's not mine. A fatal legacy of communist Poland – social, i.e. nobody's business. You can spoil, defecate. This kind of attitude translates into a careless treatment of public space when our dog destroys it, poops, etc.. The dog won't take the poop.

Sloppy pet owners are to blame for the current state of affairs. No wonder there are restrictions, bans, orders regarding dogs. How to discipline dog walkers? With fines? It is not possible to put a city guard or a police officer behind everyone. Will the Orwellian pressure – Big Brother is watching – change the mentality of slobs? If even, not soon. Changing the mentality of a large part of society is not a matter of months or a year. This is a generational issue.
That is why it is necessary to act through the educational system, as well as all institutions, pro-social associations. For now, there must be administrative tools that limit the living space of our little ones. This is unfortunate, because not everywhere you can spend a nice time in the company of your favorite, four-legged friend. George Vest once said: "The only completely selfless friend one can have in this self-interested world, one that will never leave, never prove ungrateful or treacherous, is a dog. He will kiss the hand that cannot give him to eat, he will lick the wounds he received in the struggle with the brutality of the world. When all other friends are gone, he remains".