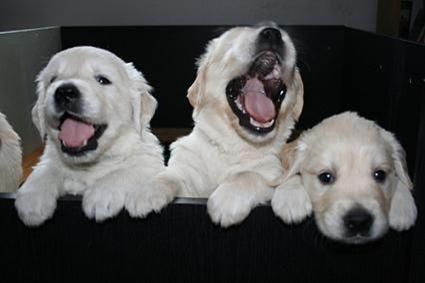 Such are the dogs we have, what breeders we have

Book reading “ Family Nest”, by german zoologist and psychologist Vitus B. Droscher, was very interesting for me, especially in terms of dogs development. She confirmed the validity of my observations and certainly enriched them. Breeders with some experience know that between the fourth and seventh week of a puppy’s life, you can’t limit yourself to just giving the dog a bowl of food. It’s not about building a bond between dog and man. In my earlier monographs, articles I stressed the desirability of several times a day playing with puppies. Human smell is not indifferent here, which puppies feel, associate nicely and which remains encoded in the early stage of their personality development. The role of the breeder is extremely important in the development of the psyche of puppies, in shaping the perception of the environment. Here I draw attention to the purpose of a certain didactic composition.

A good bitch and a good breeder play with a litter. V.B. Droscher points out that “a puppy that until seven weeks of age inclusive has never played with his real parents or with a human guardian, will remain for the rest of his life a dull, dreary block with which one does not know what to do”.

The phenomenon of a dog’s significant personality formation between four and seven weeks of age has many subtle shades. N.p. whether the puppy has olfactory contact with only one person or is stroked by many people determines its later attitude towards people. In the first case, the emphasis of the attachment will point only to this one person. The second case triggers a later kindness to all humans, even complete strangers.

A dog’s ease of communication with humans, inaccessibility or friendliness are qualities that cannot be achieved at a later age by educational means. “The sensitive taming phase” is also known in other animals. The following example shows how this stimulation can be used and how it is significant for an animal’s later behaviour. In northern Mexico, farmers use this phase to turn wild coyotes into extremely eager goat herders. They pull a small, still blind coyote pup out of its burrow and put it on the udder of a goat that has just had its kid taken away. The goat accepts the puppy as its child. The coyote, when it grows up, plays the role of an ideal shepherd and protector of the goat herd. Sam in the morning leads the herd out to pasture and in the evening he gives her a good cuddle. It reacts to the bleating of an attacked goat, it attacks the attacker regardless of whether it is a coyote or even . the owner of the herd.

Other interesting observations confirming the importance of childhood programming are the experiments (1971r.) of a group of workers at the University of California. They found that different stimuli and playfulness of animals in early childhood stimulate growth and maturation of brain structures. Rats and mice were subjected to the experiment during 30 days of their childhood. Some sat alone in individual cages, bored. Others with their peers play with different toys. The cerebral cortex of the latter was 6.4% heavier and also more developed than that of peers forced to sit passively. The number of branches of so-called dendrites from individual brain cells as well as the number of synapses, or nerve contacts, was significantly higher in the playful animals.

Prof. Gertrude Hendrix of the University of Illinois, has shown experimentally how a foal can be made into a good, docile future mount. Immediately after birth, she embraces the foal, strokes and caresses it in imitation of a mare who gently brushes the foal’s fur with her lips. She did this for the first four days, being careful not to take on the full role of the mother, but on the contrary creating herself a supporting but active role “the horse’s aunt”. In Gertrude Hendrix’s case the foal remains under the care of its mother but from its first breath it knows the smell of a human. A little later, the experimenter introduces the foal to other people so that it does not become attached to only one human and trusts all humans.

In a pen of dogs, especially in the initial phase of their development, in the first three weeks, the most important educator is the bitch, the breeder should join in educational activities, games, a little later, say in the third, fourth week, with increasing activity in time. The continuation of the aforementioned activities over time, especially the enrichment, diversification of contacts of the breeder – puppies, is extremely important and decisive for the good development of the personality of the dogs. The consequences of disturbing this cycle are very bad. This is confirmed by the following research from the world. humans. Well, on the basis of tests adapted to each age, psychologists have discovered that black children in Uganda, by the age of 12 months significantly outperformed in mental development their peers from the USA and Europe. After 12 months there was a breakdown, the advantage disappeared and at the age of 3 years these children seemed dull and apathetic. The reason for this is simple. The first year children in Uganda live in constant contact with their mother, they are carried on her back, they play with their mother who is constantly present, they sleep together. The mother is at your beck and call. After one year, the physical contact between mother and child suddenly ceases. If the little one is left in the care of grandma or auntie, he is locked up in a dark hut, without toys or peers. A dark environment without anything to arouse the child’s interest means that the excellent results of the child’s early development are completely lost.

A dog lives much shorter than a human. Therefore, the developmental stages of a puppy’s personality take weeks rather than years. Missing them, ignoring, leaving to the least line of resistance (let the future owner worry about it) is a serious mistake, impossible to make up, because it has nothing to do with the future training.
Dogs cannot be manipulated freely. Some switches are set in the puppy age and it decides whether we will have to deal with an inaccessible or friendly animal, eager to play, with readiness to sniff, train, or this willingness disappeared already in childhood. Here will not help any, later methods of teaching.

A good, thinking breeder should know about it and in the puppies’ childhood, because only then it’s possible, to create his charges on full value, intelligent, perfectly cooperating with a man animals.