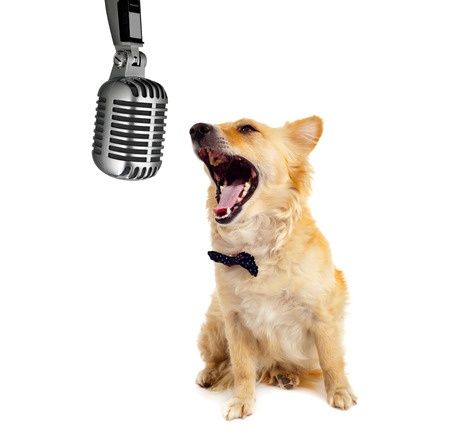 According to some people, howling is like doggy music. The idea probably arose because some individuals, listening to certain melodies, start to howl, as if joining the singing. Bourbon, a certain bassinet, started to wail terribly when the whole family gathered around the piano singing Christmas carols. He stopped when they finished the song. His owner, an extremely musically gifted man, swore that Bourbon behaved that way because he wanted to join the family music-making. „It started when the children were old enough to sing along with everyone else. I’m convinced that he did it in order to balance their thin, squeaky sopranos with low tones. And nature has endowed it with a wonderful basso profondo.”

For dogs, howling is, first of all, an important communication signal. Compared to wild dogs, they bark more often and howl less often. But it still has the same meaning – calls to other pack members. The howling of a dog that has been left alone at home is sometimes a sign of loneliness, sometimes it is purely social in nature. Wolves use such sounds to call the pack together, but also to assert their pack identity. Hearing one of their own howl, the rest often gather in a group and join in. It all starts with a dragging sound, sometimes high-pitched, which then drops to the right key. Other times it starts low and then gets into high notes.

This sound, depressing for our ears, evokes unambiguous, mournful associations. Animals, on the other hand, seem to like it, but it is not clear what makes them happier – a sound in itself or rather a social ritual. No wonder it is not so easy for people to imagine that for dogs or wolves it is the equivalent of our family music making.

During these spontaneous concerts, a scientific analysis of dogs’ howls was carried out, which proved that they have a sense of tonality. Recordings of these sounds showed that the howling animal changes key when the next performer joins the chorus. None ends on the same note as the other singers. This is why the dog, when he hears people singing, tries to distinguish between their way of making sounds. Of instruments, brasses, especially saxophone and clarinet, are particularly stimulating to their howling. Sometimes the poignant, drawn-out sound of a violin or a high human voice is also very encouraging to them. Perhaps these particular sounds sound in dogs’ ears as a substitute for howling, provoking them to join the chorus.

Critics have a voice.

I think the most famous human-dog duo in history was U.S. President Lyndon Baines Johnson and his not quite purebred terrier named Yuki. Everyone knew about the strong bond between the head of state and his pet. I remember a film that was shown on all the TV stations: the scene is set in the White House, in the Oval Office Johnson is sitting and singing first a piece of country music and then a piece of an opera aria, terribly falsifying; Yuki is sitting on his lap, energetically and enthusiastically accompanying him. There were immediate lickety-split comments in the press. Some wrote that the singing of the dog in the opera aria excerpts was as moving as the profound presidential observation about classical music. Others worried whether it would sometimes ruin the reputation of the head of state and take away the public respect due to the office. Johnson himself enjoyed the singing with his dog and didn’t care much for the publicity that accompanied it. He even wrote an article for the press in which he humorously summarized the journalists’ statements: „They weren’t all that bad, one comment even said that I sing almost as well as my dog”.

Johnson was not the only president who loved dog music. In 1936, Franklin Delano Roosevelt invited boxing champion Arthur „Stubby’ego” Stubbs and his bull terrier. He later recounted that „Stubby” played Stephen Foster songs on the banjo, and Bud howled along. Unfortunately, this show was not recorded, but a commentary by the president’s wife, Eleanor, was preserved: „I am not convinced that this can be called music at all, but it was very interesting”.

There is some evidence that dogs look at human vocal performances with a critical eye, just as Eleanor Roosevelt evaluated Bud’s singing. I was told a story about a performance of the opera Of Mice and Men, written by Carlise’and Floyd, based on the well-known book by John Steinbeck. It took place in San Jose, California. One of the key scenes is the shooting of the dog. The producers decided to put a real, live dog on the stage. There was a female dog named Jessie, who, it is true, was trained, but no one ever gave a guarantee that she would always be ready to play her part.

She was often dozing off somewhere on the stage or trying to get off the stage. During one of the dress rehearsals, Lillian Garrett-Groag, the director of the show, was very unhappy with one of the singers who could not fit into the allotted time, shattering the drama of the whole scene. As the repetitions went on and on and the effects were nowhere to be seen, Jessie the dog finally got up from her bed, walked over to the hapless singer and peed on his shoes. Garrett-Groag stopped rehearsal, someone ran to get a mop, and the director muttered through her teeth: „It may not have been particularly polite, but this dog is clearly a promising music critic”.

Anecdotes like this raise one important point. While we can’t say that dogs make or play music on their own like humans do, there is plenty of evidence that they have a pretty good taste in music and their own tastes in this area. Dr. George Robinson Sinclair, organist at Hereford Cathedral in London and friend of Sir Edward William Elgar, the famous English composer, had a bulldog named Dan. Sinclair even set aside one room in his house for a friend so that he could create in peace. Elgar held Dan in high esteem, for he believed that the dog had an exceptionally refined musical taste. There was even a story that the animal used to come with its master to church choir rehearsals and used to growl at the choristers who sang in the wrong key, much to the composer’s delight. Elgar wrote a musical piece in tribute to a dog. And it was like this: Dan, like many dogs, didn’t like water. And here he was one day, walking on the banks of the River Wye, falling into the water. He jumped out of it as fast as he could and shook himself off in disgust, giving both friends a cold shower. Amused, Sinclair demanded that his friend include this motif in his next composition. Elgar agreed and got to work as soon as he got home. This is how 11 was created. a piece from the Enigma Variations series. In this way Dan, the dog, who with his perfect musical ear judged the correctness of singing, was immortalized in music.