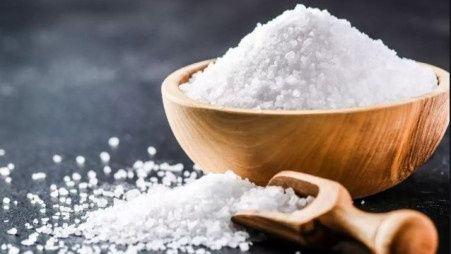 Salt content in dog foods raises a lot of emotions among pet owners. Some are concerned about the negative effects of sodium chloride (NaCl) on their pets' health. However, these concerns are unfounded in healthy dogs for two main reasons. First of all, salt is included in ready-made dog foods in amounts that are perfectly safe – consistent with nutritional standards (e.g. FEDIAF), and secondly – numerous scientific studies have shown that salt does not cause high blood pressure or kidney dysfunction in healthy dogs. [1]

Table salt (NaCl) is a source of the essential minerals sodium and chlorine and is added to ready-made dog foods in the amounts necessary to meet the health needs of dogs for these two macronutrients. Sodium has a structural function as a building block of bones, it is also a component of tissue fluids, blood and collagen, and plays a role in regulating acid-base balance, electrolyte balance and nerve conduction. In addition, sodium affects the absorption of other nutrients in the digestive tract. Chlorine, on the other hand, is present in high concentrations in body fluids, participating – similarly to sodium – in maintaining acid-base homeostasis (balance) and influencing water distribution in the body. The FEDIAF Nutrient Standards specify the recommended minimum and maximum levels of these elements in dog food. (see. table)

Dogs are relative carnivores, and their wild relatives eat mostly animal-based foods containing relatively high amounts of sodium (about 1.5g/1000 kcal metabolic energy). In comparison, cereals, fruits or vegetables have a low sodium content of approx. 0.2 g/1000 kcal metabolic energy. Dogs are evolutionarily adapted to ingest food high in sodium while exhibiting limited ability to detect this element in food. So they are not guided by the salt content when choosing their food, and salt does not make it more palatable.

Humans, as omnivorous creatures using plant-based ingredients as their main food source, have developed a strong need for salty taste. This was a mechanism used to supplement sodium and chlorine in his ww-poor. dietary minerals. Nowadays, this natural urge causes people to often consume too much salt. It has been found that high salt content in food can be harmful in humans, being the cause of disorders such as high blood pressure, kidney failure and coronary heart disease. However, in the case of dogs, studies have shown that this relationship does not exist and they tolerate well the much higher amounts of sodium in their food than humans. In healthy dogs, with constant access to water, excess sodium in the diet only causes increased thirst and increased urination.[1] In the case of chlorine, no adverse effects of its excessive supply have been described.[1]

In home-prepared foods, balancing the content of individual nutrients – including essential minerals – is far more difficult than with ready-made foods, where the amounts of all nutrients are in line with the dogs' needs. Usually pet owners do not know the content of sodium, chlorine and other nutrients in the raw materials they use, do not know what interactions can potentially occur between different elements and chemical compounds in the food, and therefore it is difficult to determine the amounts of these substances in the diet. Feeding table scraps is particularly detrimental to the health of dogs as human food does not meet the nutritional requirements of dogs and may contain harmful or poisonous components.

Salt in dog foods is a source of the essential minerals sodium and chlorine, which perform numerous functions in the body that are very important for maintaining metabolic balance. Complete pet foods for dogs contain the nutritional requirements for these macronutrients in accordance with nutritional standards. For healthy dogs, there is no reason to be concerned about feeding such foods. The situation is different when dealing with dogs that are ill (e.g. cardiovascular diseases, kidney diseases, thyroid diseases). In these cases, specially formulated therapeutic diets should be used that take into account the unique nutritional needs and necessary restrictions needed in dogs with particular health disorders.

Table. Recommended dietary sodium and chlorine per 1000 kcal of metabolic energy (EM), (according to FEDIAF, 2015)

Growing dogs up to 14 weeks. of life and of the bitch during reproduction