For the Greeks, stars were not a mixture of gases and dust, but were divine creations. A catalog of heroic deeds, human dramas and joys.The constellation of Volarius appears in the sky in spring and early summer. The ancients believed that Volarius was identical to Ikarios. According to Greek myths, the Athenian Ikarios gave hospitality to the god Dionysus, for which he received from him a vine with instructions on cultivation. When he had made wine, he gave it to the shepherds, who got drunk – thinking that Ikarios wanted to poison them – and killed him. Ikarios’ daughter Erigone searched for her father to no avail, and finally the faithful dog Majra helped her find her father’s grave, at the sight of which Erigone hanged herself in despair. After her death she was elevated to the firmament as a Virgo.

Orion – son of the sea god Poseidon and Euriale, a hunter, a beautiful and so huge hero that when his feet touched the sea bed, his head almost reached the clouds. He became the object of desire of the goddess Artemis, who wanted to marry him. But nothing came out of these plans, because Orion’s life was interrupted by a scorpion. Therefore Orion and in the sky avoids Scorpio: it sets when the constellation Scorpio appears above the horizon. Raised to the heavens, however, he did not stop hunting and, together with his faithful dog, continues to chase the hare. 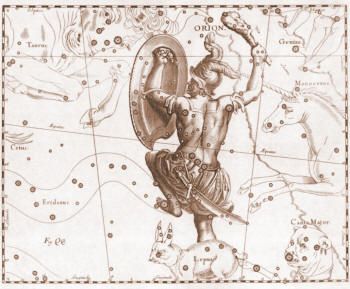 Orion
Canis maior – Big dog – in legends it is Lelaps, lying at the feet of Orion. To this constellation belongs Sirius – the brightest star in the sky. It is also known as Canicula (female) and Dog Star. The latter term is associated with the Roman so-called “Orion”. Dog’s day, or caniculum – the hottest days of summer, when the constellation of the Great Dog was most visible. In Egypt, the appearance of Sirius marked the time of harvest – The flood of the Nile. Some Roman writers saw in the Great Dog Majra, and others Cerberus. 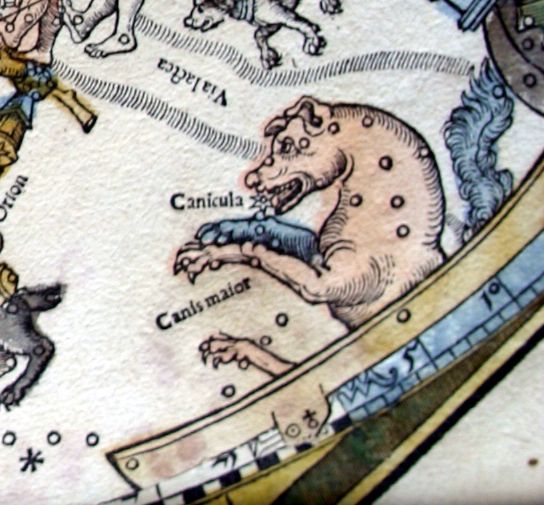 Canis maior
Canis minor – Small Dog – is a dog from Orion’s pack, accompanying him together with the Big Dog. According to another legend he is one of the dogs of the goddess of hunting, fertility and the Moon – Artemis. Another legend says that it is one of the dogs of Acteon, the Theban king, who, transformed by the goddess of hunting into a deer, was killed by the tusks of his own pack.

To the Egyptians the constellation reminded the god of the dead Anubis, who was depicted as a man with the head of a jackal. According to Arabian legend, the Little Dog and the Big Dog are sisters, one of whom ran away (WP), leaving her abandoned sister behind (MP).

Canis minor
Canes Venatici — Hound Dogs – introduced to the constellation by John Hevelius, in the seventeenth century. According to him, there are two dogs tracking the Great Bear, which are held on a leash by Volarius, or Ikarios. 142 light years from Earth there is Cebalrai – orange giant, whose name derives from the Arabic kalb al-ra`i meaning shepherd dog.