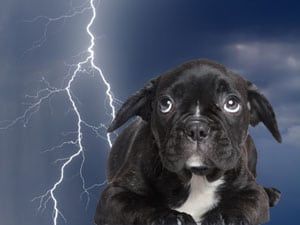 Storm is a very dangerous and unpleasant weather phenomenon. It is feared not only by humans but also, of course, by animals. Dogs supposedly perfectly sense an approaching storm. Then they become nervous, they look for a safe asylum. For some individuals, however, this is not enough and they become panicky during a storm. It is hardly surprising: suddenly there are thunders, flashes, sometimes the light goes out in the apartment. In such a situation the majority of owners make a classic mistake, which does not eliminate the problem, but only aggravates it.

It's hard to succumb to the temptation of cuddling a pet that's shaking all over with storm fear, but it's really the only good idea you can come up with at this point. Comforting the dog, stroking it, reassuring it and telling it that everything will be fine will only make things more difficult and cause the pet to become even more fearful in the future. Why?

For a simple reason. Dogs are not able to analyze reality as deeply as humans. A comforted, cuddled animal receives a clear message to itself: „I have to be scared because then the master/mistress is close to me and probably expects me to squeal, shake and wag my tail. I'll do it again!”

By comforting a fearful dog you only reinforce its fear and make it subconsciously code undesirable behaviour. So the effect will be the opposite and every time there is a storm, or even before the first thunder, the dog will come running to you and demand to be petted. When he doesn't get them, he will squeal, beg for attention, may even doze off in the apartment.

So what to do?

Best… nothing. The only help you can give a dog is to provide him with a quiet asylum. Usually in a bathroom or other room where there are no windows and the sound of thunderstorms is not as audible. You can also give the pet a treat, but never when the dog is already shaking with fear (this could also reinforce the undesirable behavior).

Do not avoid contact with your dog, but do not allow yourself to be overly affectionate. Behave normally, do your household chores, pretend that nothing is going on. This is obviously very difficult, but believe you have no other solution. Treat your pet „dry” during a storm, you are doing him a favour and working on him to grow into a brave dog.