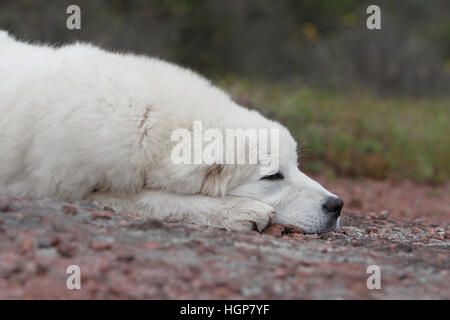 Some considerations on breeding Podhale Sheepdogs

Podhale sheepdog is one of our five native breeds. It is a living cultural heritage of our ancestors. You can say „living monument”. That’s why we Poles should take special care that these beautiful dogs with a very interesting psyche are a balanced breed, healthy, useful for work and helpful to man, even if their task would be only to be a loving companion.

Breeding is not an easy thing – requires a lot of knowledge, work, experience, years of observation of the breed, outstanding dogs, their offspring and ancestors. And for that you need a bit of luck – because we never know, even when mating the healthiest champions, what will grow up from their offspring. At first glance the matter may seem quite simple – we breed only perfect dogs and get only perfect puppies. But this is where the „stairs” – perfect animals simply do not exist. I once read in a kynological magazine that it is the easiest to have puppies for the first time – man many „nuances” he doesn’t know the breed yet, and he thinks he knows everything. Then, as time passes and information about the breed, specific dogs, breeding becomes more and more difficult – because more and more dilemmas have to be considered and more and more decisions have to be made. But at the beginning you need a solid assessment of your own dogs – knowing their advantages and disadvantages – which is not an easy matter at all – because very often people look at their beloved pets through the prism of love, ambition or pride, which can greatly distort the real picture. The principle is not to duplicate the same flaws and as far as possible not to spoil the advantages.

Writing a flaw – advantage I mean the features that affect both the beauty and health. In practice, however, it is very difficult (if possible at all) to find a sire that would have all the qualities of the bitch + perfectly expressed qualities that are weak in the bitch + no faults of his own + would not be too closely related to the bitch. Besides, two different things can be evaluation of the sire himself and evaluation of his offspring. A dog can be stunningly beautiful, and his descendants quite average. The assessment of the breeding value of the dog based on his progeny is more important for me than the assessment of the sire himself. Besides, even the most titled champion is not suitable for all bitches. If in the progeny of a given dog and a few bitches we see some weak points, it is pointless to breed such a dog even to an equally beautiful bitch, who in the same „points” is not perfect. But here we encounter another difficulty – first of all it is very difficult to get any information – which dogs pass on the advantages and disadvantages, secondly in practice we are dealing not with one trait, but a huge number of them, thirdly our knowledge is shaped by observing dogs at shows, where most often single specimens from specific associations appear – and to be able to say something certain one should watch not one, two or five descendants of a given animal, but all of them – and those that appear on shows, and those whose owners do not want to play with it, and those who already at the age of 8 weeks had written in the certificate „non-breeding” (the latter may even be the most important, because the defects are very serious and it is necessary to avoid matings of animals, which have the same defect in their offspring).
A big problem in breeding the Podhale sheepdog seems to me that the existing population is very related.

I don’t know if it is possible at all, and if so, it probably requires a lot of effort to find two individuals with a full pedigree, in which not even one ancestor would repeat. And at the same time the size of the breed is small. Ironically in the country of origin of the breed I still meet with the question – „what breed is this? Golden?”. I have met with voices about tightening the requirements for breeding which would result in raising the level of breeding. Whether this goal would be achieved?I don’t know, but I do know that by doing so, we would further reduce the handful of enthusiasts who want to do something for the breed. Would we still have pedigree Podhale sheepdogs in Podhale?? Would the highlanders still breed these dogs since, as I see the breeding requirements that are in force today, fewer and fewer local breeders for various reasons are able to meet? And in my opinion it would be a big loss if in a dozen or so years it would be difficult to find them there. For me personally the Tatra Mountains without the Podhale sheepdog would be kind of empty. . And I wouldn’t be satisfied with seeing white (or not quite white) puppies in cardboard boxes near Gubałówka. Because let’s be honest, if someone cares about the future of the breed the only way is to own or breed an animal with a pedigree. Pedigree is not a piece of paper – and proof that the ancestors of the dog met the requirements of the model in terms of exterior and psyche that is, we have a Podhale sheepdog and not some white dog. I personally have respect for breeders and owners, who with their daily effort and work made it so that every day I can enjoy the fact that there are with me these wonderful dogs. By having dogs without pedigrees, we are not really doing anything for the future of the breed – in fact it is not even certain that they are Podhale sheepdogs at all – whether e.g. the grandfather of such a dog was not a brown mongrel, and the puppies after him will not be spotted.

Besides, by making the breeding requirements stricter we would deplete the already quite narrow gene pool of the breed. And with this comes the fact that it would be necessary to breed in a large kinship – any recessive defects could show up with greater frequency, we would have dogs less fertile and weaker in terms of overall longevity. These are the effects of the so called inbred depression.

Maybe we should consider whether it would not be better to leave the breeding requirements as they are now, but much more attention to information. Maybe it would be worthwhile to conduct club reviews of breeding, evaluation of dogs on the basis of their progeny, collect information about possible defects, which appeared in litters after the given dogs. Do not remove dogs from breeding hastily, but provide as much information about them as possible. So that the owners of bitches looking for a stud dog don’t have to wander in the dark, but have some reliable signposts. These data would of course concern both dogs and bitches, but I must admit that the dogs – males have more influence on the breed than bitches – so in their case such information is more desirable as well as more reliable – because you can evaluate more offspring. A great opportunity for this kind of activities are club shows.

„Clubs” for me it’s a celebration of the breed. They gather many excellent dogs as well as people fascinated by a particular breed. They can be treated as spectacular „show”, like „race” for titles or summary of breeding work – and for sure they are all at the same time.

I think that breeding competitions are worth special attention – not played in such dimensions on other shows. The choice of Best Breed, Best Reproducer or Best Brood Bitch can be especially instructive. I mean here, however, not uncritically following the judge’s verdicts in your breeding plans, but a thorough observation of each of the presented groups and looking for such qualities that we want to improve or consolidate in our dogs. In my opinion it is also very important how equal and similar are all the dogs in the group. Such an equalization gives a higher probability that the same type and traits will be passed on to the offspring. These aspects are certainly important for people who already breed a particular breed, but I think that also those who are just beginning their adventure with cynology can learn a lot.

When I started it, the club exhibitions of Podhale Sheepdogs were organized very rarely. When I read the exhibition schedules and „I reached” to the club exhibitions of Polish Lowland Sheepdogs or Polish Shepherd Dogs always awoke in me a kind of regret and insufficiency – why not Podhale Sheepdogs? A surrogate for me at the time were national dog shows in Zakopane, which always gathered a large compared to other exhibitions stake of Podhale. In 1992 – 2007 I was on 13 such shows. For the first 7 years only as an observer, later also as an exhibitor. That’s why I think that now, when for a few years there are regular Club Dog Shows, you have to be at such an event, because it is organized for all those who are not indifferent to the fate of the Podhale Dog. (Many thanks to people who put their time, work and heart into organizing them.) At dog shows – sometimes you win, sometimes you lose – but in the case of „a Podhale club” I think something else is more important – this is our native breed which needs very much our – Poles – care about its future. I dream that there will come a time when there will be more than 120 Podhale Sheepdogs on such shows, as it happens now e.g. on welsh corgi club shows (in 2007 there were 141 of these Welsh sheepdogs entered in the club show). I think it is also a nice motivation and a kind of thanks to the organizers, when people want to come to the events organized by them. Because without participants such events have no raison d’être.

Diversity is important for the good of the breed – by choosing a sire for your bitch you already benefit from someone else’s breeding work – you can not do everything alone – cooperation is necessary. Club Shows are also an opportunity to meet other Highland Sheepdog lovers and to learn something more – You just have to watch and be careful that your own ambitions do not overshadow what is most important.