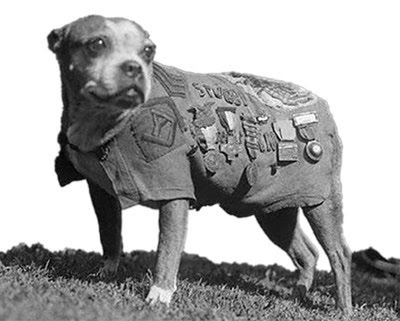 Dogs in World War I

The Prussian army established a school for military dogs in 1884 in Lechernich near Berlin, where they were prepared for service as guards and messengers. 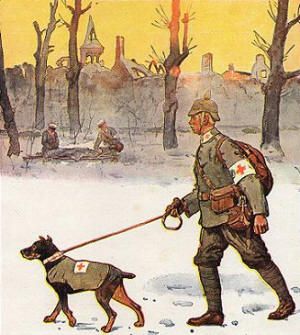 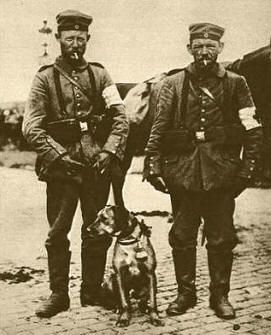 It was the Germans who first used dogs as Red Cross helpers, creating a sort of rescue squad, tasked with delivering medical supplies in special pouches, as well as searching for the wounded on the battlefield. They were trained to inform each victim by catching them on the leash. Dog units were called Sanitätshunde.
In 1885, the school published the world’s first war dog training manual, which was translated and published in the United States in 1904.

In the beginning poodles, airedale (because they proved themselves in the British police) and collie sheepdogs were accepted, and later German shepherds and Dobermans. 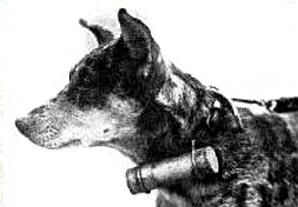 A dog with a report sleeve

The Prussians were particularly fond of dogs „wolfdogs” due to their outstanding ability to recognize and learn commands, obedience and vigilance.

Dogs were not the only ones who had to meet high standards. The trainer could only be a person who was a lover of these animals, understood their behavior, knew with what methods to get the dog to cooperate.

In August 1914 the dog army had 6000 trained four-legged soldiers ready to go to the front. By the end of the war, the German army had 30000 dogs, the French 20000, the Italian 3000. Smaller units have also been trained by the Russians, the British and the Belgians. 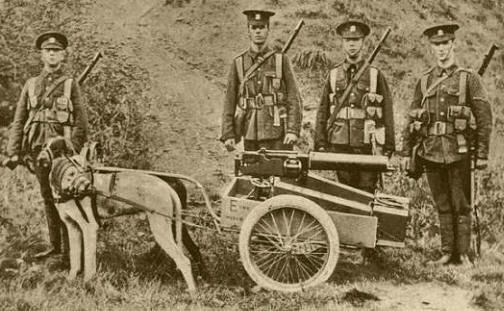 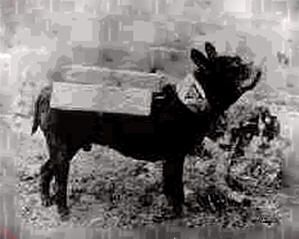 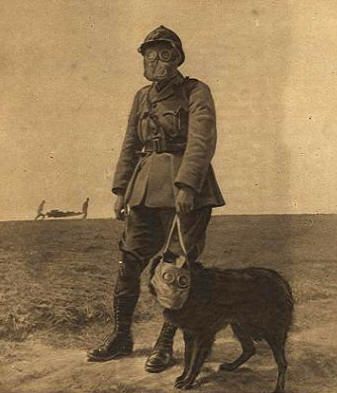 Dog in a special gas mask

In addition to the breeds mentioned above, bulldogs, bloodhounds, retrievers, Jack Russel terriers and foxhounds have also begun to be trained. The latter were ideal as rat exterminators, disturbing the already scarce food supply.
Preference was given to medium-sized breeds with grey or black fur, good eyesight, keen hearing and smell.

The Allied Red Cross also used dogs as paramedics to search for the wounded, calling these troops „dogs of mercy”. The dogs were trained to bring a helmet or some piece of equipment to their handler and thus report when a wounded person was found.
A French dog soldier named Prusco found more than 100 wounded men on the battlefield in just one day, saving them from imminent death. 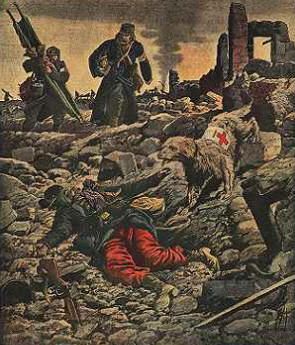 Dogs were given the same rations as soldiers: coffee and bread for breakfast; broth, meat, bread and water for lunch; meat, bread, sugar and chocolate for dinner. 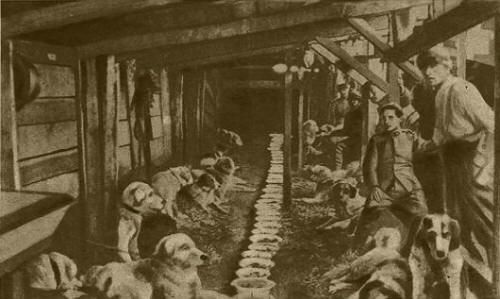 After World War I, many European countries, following the example of Germany, assigned demilitarised dogs to serve in penitentiaries, where they guarded prisoners.