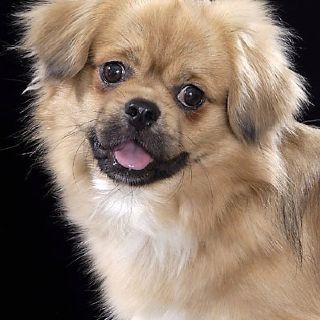 The Tibetan Spaniel is a breed derived from a small dog in the Tibetan Highlands. From the surviving images of these dogs, researchers into the history of the breeds have found that these dogs were most popular among the upper classes, often an object of exchange or gift for another person. In Buddhist monasteries, they were kept for vigilance as they were often located in areas prone to frequent looting. These dogs were reared together with mastiffs, because these small dogs were quicker to signal danger and mastiffs could react to it more effectively. Tibetan spaniels were also bred as the so called. "prayer dogs", trained and used to turn prayer mills. These dogs came to England in the late 19th century, imported by British troops from India. There are assumptions that these dogs may have appeared in Europe as early as the 17th and 18th centuries, thanks to the Jesuits returning from missions in Japan and China or with merchants from the Silk Road. The first official mention about the presence of Tibetan spaniel in Europe is information from 1848, when a dog of this breed was presented at the exhibition in Birmingham. In 1934 Kennel Club presented the first standard of Tibetan spaniel. During the war period there was a strong regression in breeding. After the war, the development of breeding was taken up again and in 1957 a Tibetan spaniel breeders club was founded in England. As a breed this spaniel was recognized by FCI in 1961.

The Tibetan spaniel is a typical salon breed, functioning as a companion dog. It is an active, alert and obedient dog. Very attached to the owner, devoted to the family, in relation to other people is quite distrustful. These spaniels are very intelligent breed and willing to learn new things. Can live in a small apartment.